TAMPA — On top of everything else, the coronavirus pandemic has exposed the critically important link between workers having child care and businesses running smoothly.

Workers need to know their kids are in good hands to be able to focus on the job. At the same time, caring for very young children is hard work.

But beyond that, and even before the pandemic, there was a growing recognition among Florida employers that if they’re going to find the talent they will need in the future, early childhood learning is worth investing in.

“Many studies show that if kids are ready for kindergarten, they have a good chance of making it through elementary school, high school, graduating and maybe going to college,” said Tampa Bay Lightning owner Jeff Vinik, whose Vinik Family Foundation has committed $3 million to improving early childhood education. “There is a direct correlation between early childhood education and outcomes for people’s lives and for society in general.”

In Hillsborough County, Vinik’s money is supporting a three-year research project by the Lastinger Center for Learning at the University of Florida into ways to teach child care center directors and their staffs how to make their care more educational.

“Venture philanthropy,” Vinik calls it. “A dollar invested in kids when they’re 3 or 4 has a very high ROI” — return on investment. In 2014, then-President Obama’s Council of Economic Advisers estimated that expanding early childhood education would create broad social benefits of roughly $8.60 for every $1 spent, about half of it from increased earnings in adulthood.

Last year, during the program’s first year, Lastinger Center researchers worked with 421 teachers who, in turn, cared for more than 4,000 children at 44 different centers.

The project has several goals. One is to help child care teachers and center directors develop new skills and improve their interactions with children and their families, making their centers more enriching places for young kids.

Another is to give child care practitioners — some who don’t have a lot of post-secondary education, others who run home-based sole proprietorships — a chance to advance their careers, build support networks, and see themselves as professionals doing a critically important job.

Rosado, 55, studied nutrition as a college student in Colombia and started working as a housekeeper on Davis Islands after coming to the United States. She began working in child care here after a family whose house she cleaned asked her to help with their twin 5-year-olds, a boy and a girl.

That eventually led Rosado to open her own day care business at her house about a mile and a half northwest of Tampa International Airport. She is licensed for 12 children but was caring for five when a Tampa Bay Times reporter visited her in late January, before the pandemic.

That day she had served a lunch of navy beans, brown rice, pears and milk and was holding a 15-month-old boy in a T-shirt that said “No One Sleeps ‘til I Say So” on her lap as she discussed some of the things she had learned from the Lastinger Center’s programs, which include online tutorials and coaches.

With the children, she said now focuses more on building vocabulary. For example, when they use a word incorrectly, she tries not to say “no.” Instead, she says the correct word and uses it in a sentence for them.

“They learn so fast,” she said. “When I say ‘no,’ the kids scream and cry. When you talk nicely, when you explain” — even with children as young as 11 months ― “they understand everything.”

The program also helped her recognize that different families face unique challenges, leading her to have more empathy for parents and better communication with them.

“We can engage with the families more easily now,” she said.

The program, known as the Hillsborough Early Learning Network, is not the Lastinger Center’s first venture into improving early learning.

It’s developed educational, skills-focused and professional development courses for directors of larger child care centers, teachers in the classrooms and owners of home-based child care operations. And it made the course materials accessible on its own platform in bite-sized chunks that can be viewed on a mobile phone or classroom computer.

The Hillsborough project started in 2018 with a mix of in-person workshops, instruction and on-site visits and coaching, plus a lot of short tutorials that could be watched, say, while a caregiver was holding a sleeping baby. Learning materials, offered in English and Spanish, cover topics as broad as health, safety and nutrition, and as targeted as ideas for circle time after nap.

Instructor-led courses introduced new skills, which teachers took to their centers to practice, then returned for follow-up discussion. Lastinger-certified coaches from the Early Learning Coalition of Hillsborough County did in-classroom coaching.

Amid the pandemic, however, the coaching, career-advising and other in-person interactions have migrated online, too. Still, most program participants have stayed engaged, partly because they’ve had more time.

“People are taking the opportunity to do what they can virtually to continue to build and strengthen their practice, their business, their services and their impacts on children,” said Lisa Sutter, the Lastinger Center’s program coordinator for the initiative.

As of mid-June, perhaps 30 percent of the centers involved in the program have remained closed, either partially, temporarily or in some other way. But 71 percent of the participants who started the program in 2018 are still with it.

Organizers hope that learning that starts with online courses can lead child care workers to get a nationally recognized child development credential and put them on track to earn an associate’s degree.

To help, the program provides participants with small stipends. Teachers, for example, receive $150 for each course they master on the program’s learning platform. Teachers and directors also receive $250 for each term they are enrolled in courses at Hillsborough Community College in pursuit of an associate’s degree. And the program covers the costs of submitting portfolios for the national certification.

During the first year of the program, caregivers’ scores on subject matter tests rose 30 percent compared with their scores on pre-tests at the start of the course.

This spring, the pandemic has slowed the collection of some data, much of which is gathered in on-site visits, but the program remains on track generally. Researchers hope the second-year data, once collected, will tell them whether the kids benefit from what their teachers are learning.

In Hillsborough, researchers hope the Vinik-backed experiment leads to a model they can use in other Florida counties. Meanwhile, the topic is gaining traction elsewhere.

In February, Thrive By Five Pinellas, which is funded by the Foundation for a Healthy St. Petersburg and run by the Early Learning Coalition of Pinellas, launched a program to encourage employers to create family-friendly workplaces and improve educational access and development for children younger than 5.

The Florida Chamber Foundation, the policy analysis arm of the statewide chamber, tracks the percentage of kindergarten students who come to school ready to learn and has teamed up with the Children’s Movement of Florida, which has its own initiative to recruit private sector support called “Bosses for Babies.”

“We started talking to folks around the state about what are the assets in your community, what are the needs?” foundation chief operations officer Donna Wright said. “Often you hear, talent is the currency. If we’re going to work on ensuring that all third graders read at grade level and that all kindergartners are ready for the day that they walk into that classroom, then we’ve got to start with the earliest years.”

For example, one child was “having a hard time, just throughout the day,” so the teachers took a step back to figure out what they were doing to trigger the child’s misbehavior, she said.

That’s good, said Parker, and so is having the coaches come in and observe the classroom. She’s been in the field for 20 years, long enough to run into former preschoolers at the grocery store with their own kids, and she has a favorite quote on the importance of the work from abolitionist and author Frederick Douglass.

“It is easier,” he said, “to build strong children than to repair broken men.” 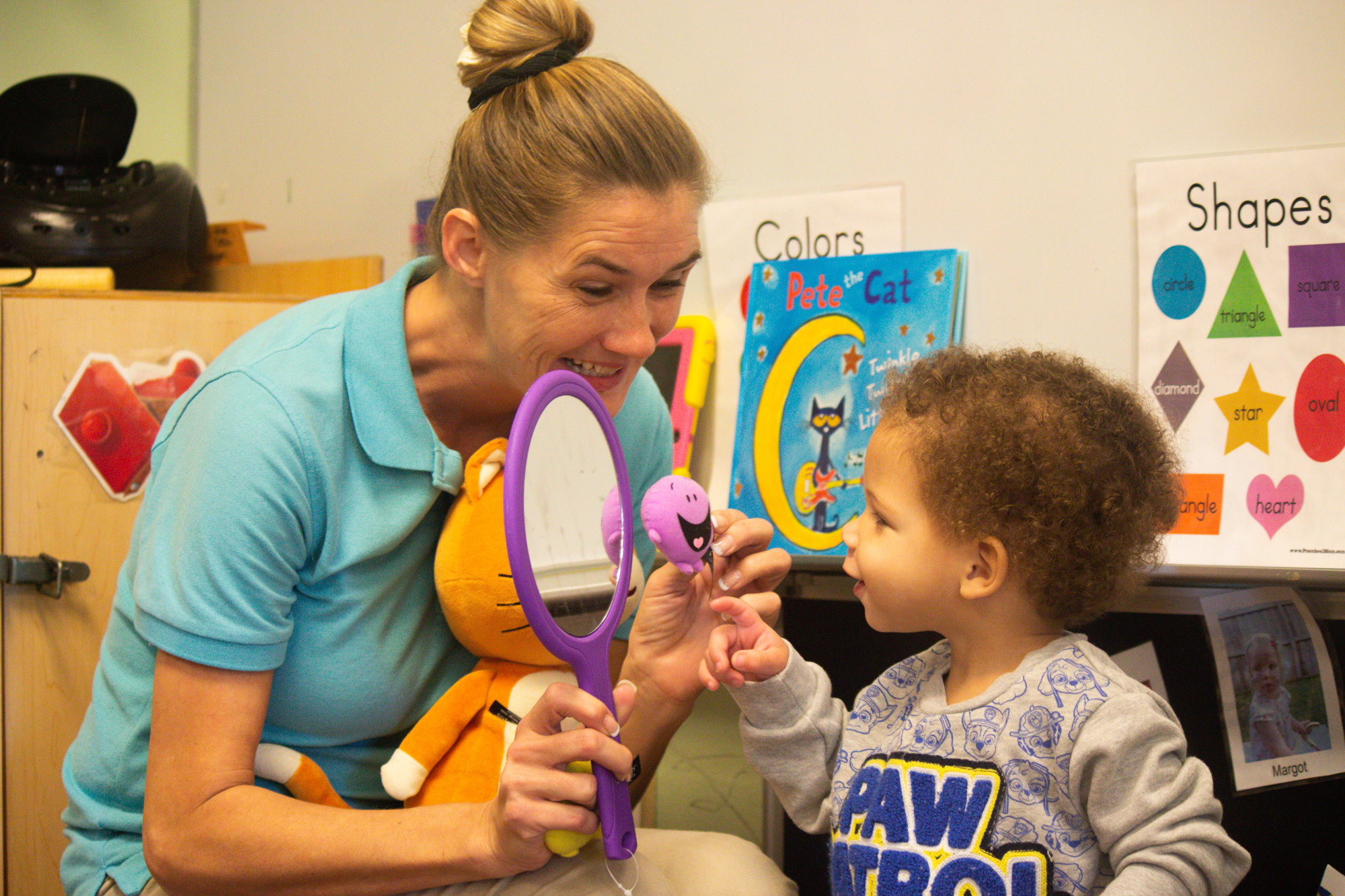